There are currently 13 horses at the riding school.

Seven of these are Connemara Ponies as they are very versatile. Generally of a quiet nature and strongly built, Connemara Ponies are ideal for beginners as well as advanced riders, also they can carry children or adults. There is also one Irish Sport Horse, one Thoroughbred, one arabian horse, one Quarab, an Appaloosa cross and a small pony. 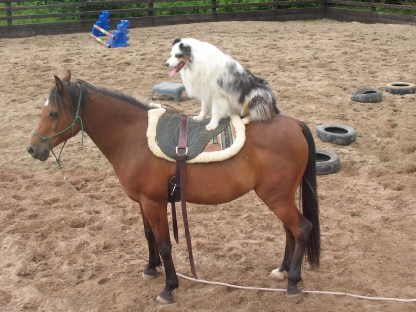 Being 29, Mashud is the oldest of the horses. He is a beautiful bay Arabian Horse. Until a few years ago he was working a lot, especially with beginners and small children. As you can see, he even lets dogs ride him!

Today, he is retired as he is getting old and Arthritis has set in, so he is living out his days in peace (when he is not getting harassed by younger horses!)

He is still the boss of most of the herd and still as cheeky as ever.

Pepina is a 14 year old chestnut Quarab, her father was an Arab like Mashud and her mother a Quarter Horse. She is Mashud’s best friend and simply adores him.

Pepina is a bit of a dragon, all the horses bar Mashud are afraid of her. She is Mashud’s second in command.She is generally only ridden by Carmen as she is a one person horse. 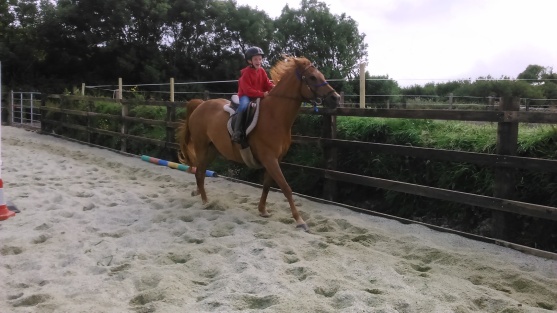 Jessie is a 20 year old chestnut Thoroughbred mare who is also retired due to Arthritis. She was a racehorse in her younger days. After her racing days she worked in the riding school for about 6 years. She was a very quiet horse to ride and liked by everyone. 6 years ago she had a son, Finn.

Finn is a 6 year old grey Irish Sport Horse. He is the baby of the herd. He was trained as a 4 year old and ridden gently during the first winter and took part in pony camps last summer. Like his brother Bandit, he is quiet and easy going but a little bit more lively.

Bandit is a big grey 8 year old Connemara pony. He is Finn’s half brother, their father is Newtown Rebel, a grey Connemara Stallion. 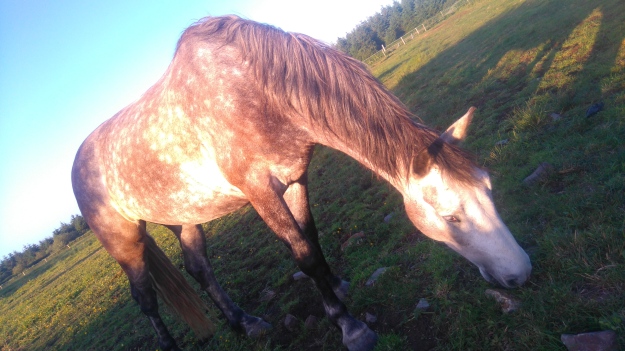 Bluebell is Bandit’s best friend. She is a 13 year old Cremello Connemara mare. Bluebell likes going fast but is easily controlled. She had a foal, Benji, and herself and Benji are still very close to each other. 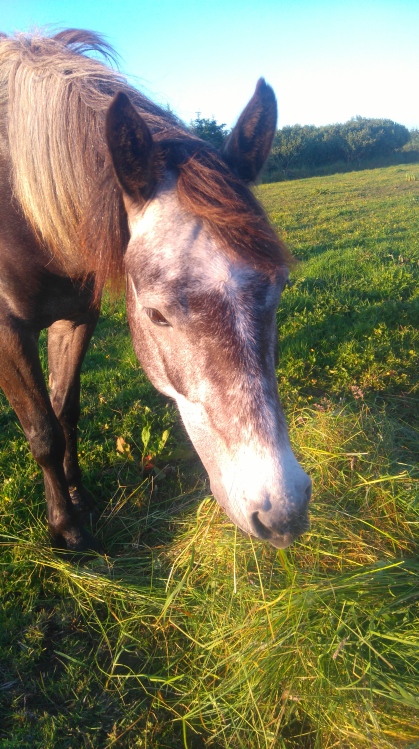 Benji is a 7 year old grey Connemara Pony. Like his mother, he likes going fast. He is a very friendly pony who loves coming for a cuddle. 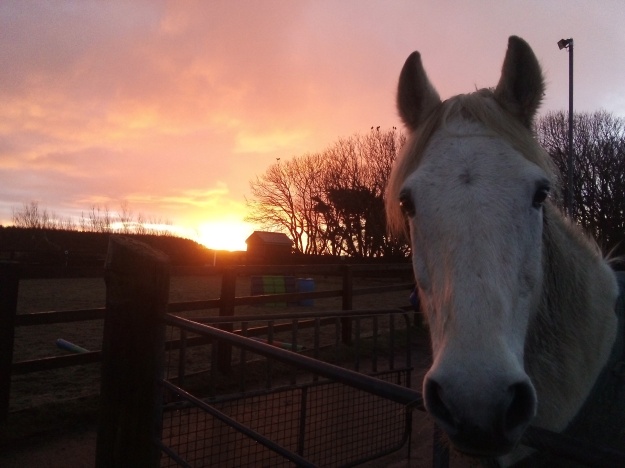 Dusty is a 21 year old Connemara Pony. He came to the riding school in 2015 as the last one to join the herd. Dusty is a lovely pony, despite his age he is quite lively and always likes to go. Sadly he suffers from arthritis like the other two older horses, but he can still be ridden.

Monty is a 17 year old Appaloosa cross. He can be terribly lazy and stubborn, but he is also a pony who is up to anything. Be it swimming, jumping, carrying dogs around, nothing is too weird for Monty. He is also very good with small kids and beginners.

Monty is loved but a lot of kids at the riding school because he is so quiet and reliable and up for fun at the same time. 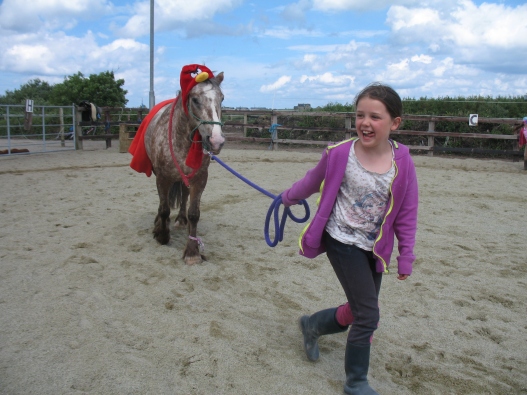 Magic is a 19 year old pony, she is the smallest pony at the riding school standing at 12.2″ hands. Being so small, she is mostly ridden by young children. She is very good with beginners, not too lazy, not too fast, just a little bit stubborn. 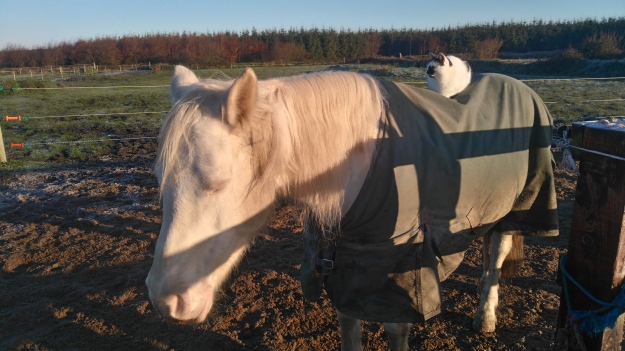 Missie is a 12 year old Cremello Connemara Pony. Bluebell and Missie are half sisters and have been living with each other for most of their lives. Missie is another favourite at the riding school. She is a quiet pony and very good on treks. In 2019, she suffered a serious injury, a fractured elbow. After surgery she has been recovering well and is now being ridden again. 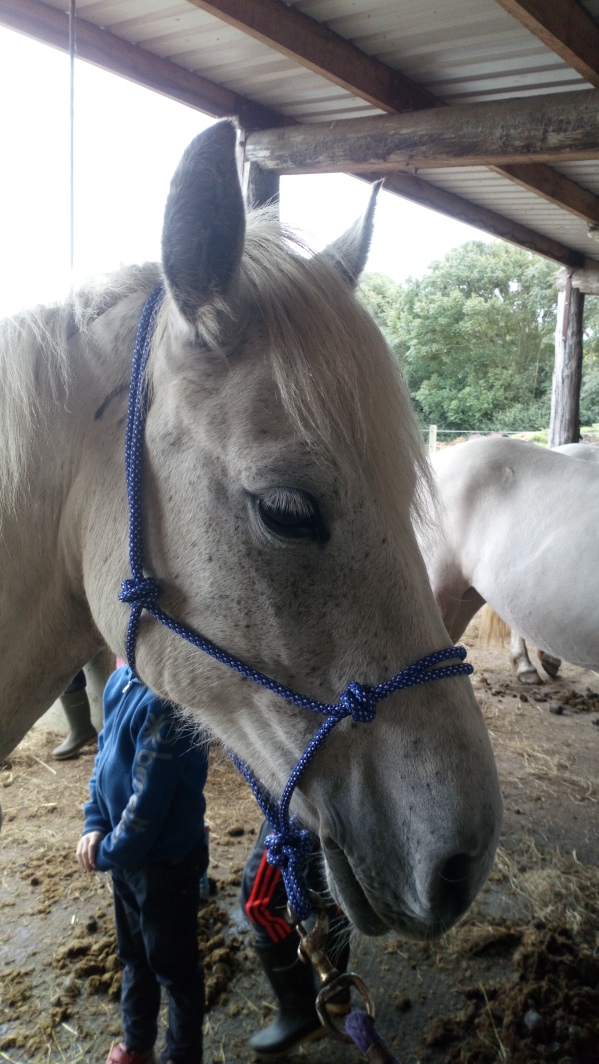 Juno is a grey Connemara Pony. He is 11 years old and he is the smallest one of the Connemara Ponies at the riding school. Juno is a very good pony, he is quiet and is often ridden by beginners, but he can also be very lively with a more experienced rider. Missie and Jessie are Juno’s friends.

Amy is a 13 year old Connemara Pony. She was the first Connemara Pony and Cremello to arrive at the riding school about 12 and a half years ago. Mashud was Carmen’s only horse when Amy arrived as a five month old foal.

Amy is a cuddly horse and likes being scratched all over. She is particular with her riders though. Beginners are not to her liking or timid riders. She can also be quite lazy. For a more experienced rider she is a great horse and will do anything.